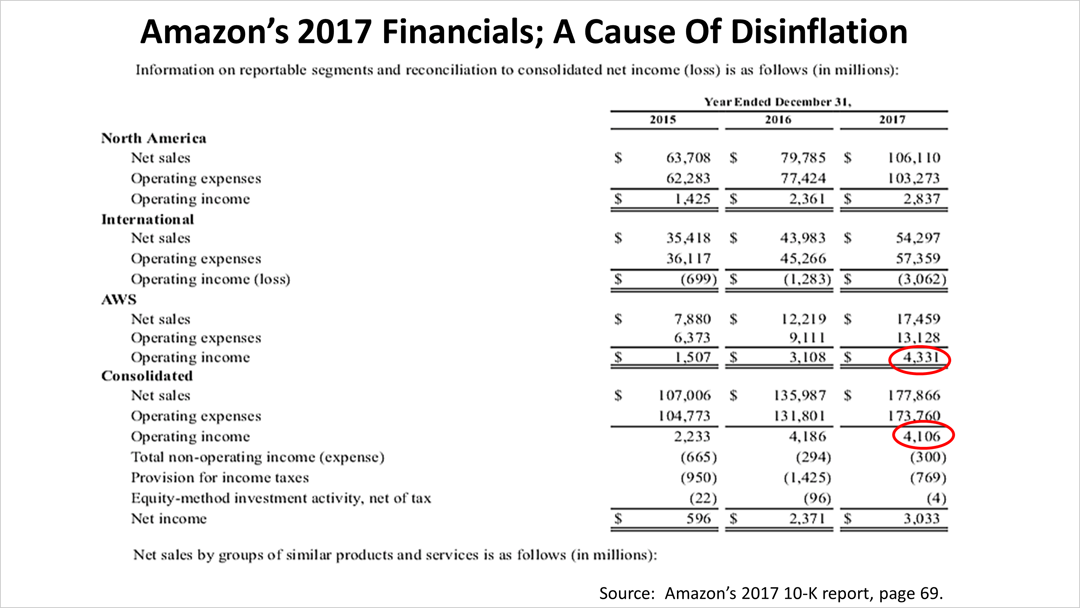 Unless you're a professional securities analyst or MBA, it may not be easy to discern that Amazon lost money on its main business from the company's required 10(K) annual public disclosure filing with the U.S. Securities and Exchange Commission. But it's disclosed in this table on page 69 of Amazon's 10(K) for 2017. AWS earned a $4.3 billion profit on $17.5 in net sales revenue, while total profits were $4.1 billion on well over $100 billion of sales.

Amazon could afford to take a loss on its retail business. It's a long-term investment in gaining market share. Losses taken on dominating internet retailing were offset by AWS, Amazon's business of building the infrastructure of the web, which has been very profitable.

With its strategy to expand retail market share based on razor-thin profit margins, Amazon transformed retail sales and consumer behavior over the last decade. Before buying at a traditional retail store, consumers now routinely check their phones for a lower price online. The increased efficiency of internet sales enables consumers to buy goods at insanely low prices. While Amazon became the Crazy Eddie of the internet era, it has caused disinflation.

Inflation has always been a somewhat mysterious factor in the economy. It's hard to understand its causes, and harder to control. Officials at the U.S. Federal Reserve Board have conceded in recent years their surprise at the persistently low inflation rate. Amazon is likely a factor for in prices are not rising fast in the economic boom.

This is not a recommendation to buy or sell Amazon securities but an observation about the internet retailer's impact on the U.S. rate of inflation and its implications for economic growth. In the second quarter of 2018, the government reported a 2.9% surge in productivity because real wages after inflation declined, lowering the cost of an employee to companies by nearly 1%, according to the Bureau of Labor Statistics quarterly report through June 2018.

Declining unit labor costs amid real wages is a positive for economic growth, and internet retailing is an influence in the economy to keep an eye on. Among the swirl of forces that affect inflation, ranging from international oil politics to the Federal Reserve, your Amazon shopping cart is playing a role.